Facebook has introduced a new update to Creator Studio, which will announce that business accounts can schedule Instagram posts and IGTV broadcasts six months in advance. In addition to this new feature, Facebook has also introduced innovations in the scope of live streaming, Watch Party and Creator Studio.

In fact, it made post sharing on Instagram available to third-party services last year. However, this long-awaited feature can make Facebook live on its own platforms, making it widely used by businesses. Moreover, with this step, restrictions such as not being able to share more than one photo can be eliminated in the post users encounter in third-party apps.

To take advantage of the feature, you must have an Instagram business account or a content producer account linked to a Facebook page. Once you’ve associated your Facebook page with your Instagram account, you can plan your posts by clicking on the Instagram button at the top of the page. Through this panel, you can trim your images and add a tag to your posts. For now, the panel that only supports posts is not yet available for the Stories format. 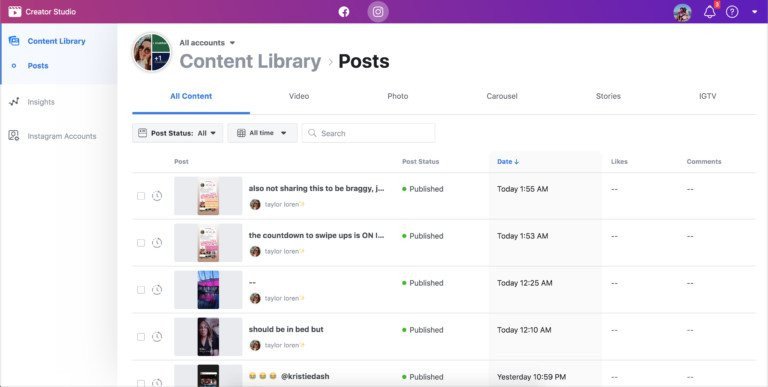 In the meantime, it is worth mentioning the new features that Facebook has brought to Watch Party and Creator Studio. thanks to the feature, broadcasters will be able to broadcast a test under the supervision of admins before the live broadcast. In addition, live broadcasts can be shortened and shared after the broadcast is over. Let’s add that the maximum duration of live streaming has been moved from 4 hours to 8 hours.

The Watch Party added pre-planning and replay features. The platform’s live subtitle feature has began to support 13 new languages, mainly Arabic, Chinese and German, while new performance statistics have been introduced for tracking together.

However, this is not the only change in the focus of statistics. The company adds new statistics to Creator Studio, enabling publishers to learn more about Instagram and Facebook content.

All of Facebook’s content producer and business focus is that these innovations will encourage potential advertisers to use the family of apps.